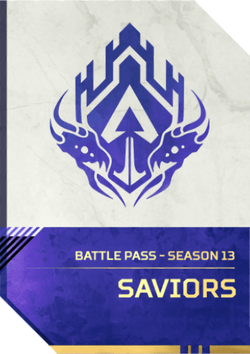 The Battle Pass is a system that offers players rewards for playing and completing challenges during a predetermined period of time called "Season".

There are two types of Passes available that can be purchased in the Battle Pass tab:

Unlock premium rewards up to the current Battle Pass level.

While playing, the player will receive

Stars. For every 5000 XP acquired, the player will earn one star. The player can also gain stars by completing challenges or picking up treasure packs. By accumulating

Battle Pass Level that will then unlock the rewards set for that level. As soon as the player purchases the premium Battle Pass, levels can be purchased with

Apex Coins. However, the 10 bonus levels after level 100 cannot be purchased.

Purchasing a battle pass level with 150

Apex Coins does not reset the star progress towards the next level. If you are level 89 with 7 stars and buy 1 level, you will be level 90 with 7 stars.

Apex Coins, enough to purchase the next season's Battle Pass, and 1,200

Crafting Metals, enough to craft a Legendary cosmetic. It also normally grants a player 2 legendary legend skins. Battle Pass levels per season are capped at 100 with a bonus 10 levels that rewards a reactive Legendary weapon skin.

Battle Pass rewards from before the

Season 10 Battle Pass are exclusive to that season and will not come back again though recolours may be released., while those from

Season 10 onwards may be resold.