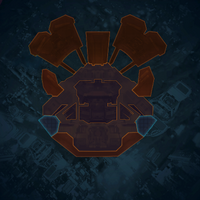 Drop-Off is a custom

Warriors Collection Event. The map is located on the planet Psamathe.

Sitting high above the skyline of Malta is the fully automated Hammond Manufacturing Tower that was constructed for a single purpose: the early production of critical systems for Olympus.[1] Codenamed Drop-Off, its rooftop is left exposed due to its height and lack of human presence. Brought together by a mutual hatred for big Outland corporations, Arenas fighters covertly commandeer the place at night for fierce Arena matches under the smoggy skies. It’s a win-win for all groups involved, with an added element of danger for the participants and profits made on Hammond’s property right under their nose.[2]