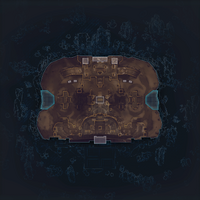 Encore is a custom

Arenas map introduced in the

Monsters Within event located on the planet Boreas.

Found on the planet Boreas, Encore is the Arena where Seer made his name. Treated as a cursed outcast after being blamed for his planet’s moon being struck by a meteor, he slowly gathered a following of outsiders who would come to watch him compete. Over time, the Encore Arena became more and more designed to reflect the style of its star competitor.