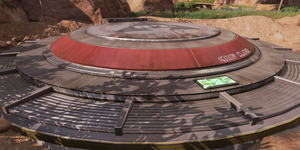 Loot Bunkers were a Map Feature added to Kings Canyon in

Season 5. There were five scattered across the map, but only four of them could be opened. They were removed in

Crypto had a special interaction with three of the four loot bunkers. At the end of the hallway, on the opposite wall of the panel used to open the small hatch, there is a vent. If Crypto uses his drone to go into the vent, the drone will reach a room with several monitors; the drone can interact with the monitors to play a message from Mila Alexander, explaining what happened to her after "Forever Family".

This bunker was located in the cliff between Salvage and Water Treatment. Due to Skull Town sinking, it was exposed and can be accessed without using a hatch by jumping down the cliff or using the zipline beside Octane's Gauntlet.

This bunker was located in the river between The Cage and Market.

This bunker was located in the forest between Artillery and ARES Capacitor.

This bunker was located by the waterfall between Slum Lakes and Creature Containment.

After hearing this, Crypto will sigh from relief and say "Forever family."

This bunker is located by Slum Lakes. It cannot be opened, except at the end of the

Season 5 quest, "The Broken Ghost" (which is no longer available).

After the Legends have assembled the artifact for the quest, Loba leads them to the bunker and it opens for them. The location is revealed to be The Lost Tomb with the subtitle A Secret Place. The bunker is unlike any of the others: it appears to still be in use and there is vegetation growing inside.

In the end, there is an active charge tower with a headless simulacrum body attached to it. The player completes the quest by attaching the artifact, Ash's head, onto the body, and Ash is revived.

Gameplay footage of the finale of "The Broken Ghost" quest. The mission "Ashes to Ashes" begins at 13:30. 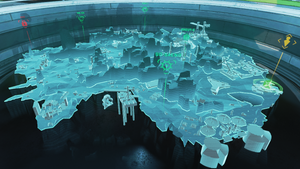 The bunkers are marked in Crypto's Map Room.
Retrieved from "https://apexlegends.fandom.com/wiki/Loot_Bunker?oldid=38200"
Category: