Map Features are areas in World's Edge, Olympus and Kings Canyon that have special interactions, from simply giving you gear or getting you to a certain area, to relaunching into the sky.

These are Map Features that can be found in the available maps. While not all have these features, map features listed here appear on at least two of the maps.

Care Packages are special supply packages from the sky. When looted, this package guarantees more high-end loot and sometimes premium loot exclusive to these care packages, giving you a higher chance of survival.

Doors can be opened and closed by pressing the interact key, or by shooting the handle with the Wingman, L-STAR, 30-30 Repeater, or Sentinel. Regular doors can forcibly be opened if blocked by an object or player by kicking it open using a melee attack on it twice. They can also be opened by Crypto's

Bullets do not go through doors but doors can be destroyed by explosive damage or kicking them down.

At the start of each match, a random location on the map is designated as a Hot Zone, indicated by a pulsing blue circle marker. Indicating that, around that area, there will be higher quality loot and a chance of finding a legendary version of a weapon, which will have full legendary attachments and use regular ammo.

High altitude red balloons, connected by a vertical zip-line that are scattered throughout the map. Interacting with one of these jump towers will send your legend up the zip-line and automatically deploy your glide upon reaching the top, allowing you to traverse the map quickly. You can drop off of the zip-line at any time by pressing the jump key, but this will cause you to fall instead of glide.

The Phase Runner is a large portal connecting two points of the map, similar to Wraith's

Dimensional Rift however, players are not immune to ring damage while using it. You cannot be downed in the phase runner's portal however, and as an exception players low enough to die to a single ring tick won't take ring damage until they exit again.

On Olympus, entry points are located at Hydroponics, Hammond Labs and Rift Aftermath. An alarm will sound on the other side of the portal, letting other players know that someone is exiting the Phase Runner. Additionally, after exiting, players will be invincible for a few seconds.

Respawn Beacons are scattered all across the map so that players may respawn dead teammates, as long as at least one squad member has retrieved their banner. Respawn Beacons are a one-use feature but up to two team members may be respawned at once. Respawn Beacons can be used by any player, but once used, is deactivated for the rest of the match. These beacons are often surrounded by 1-3 supply bins to resupply the respawned teammate. To activate a beacon, hold the interact key while close to it, and after a few seconds teammate will be airlifted in. Unlike while looting a death box, the player cannot strafe while activating the beacon, much like reviving a downed teammate. 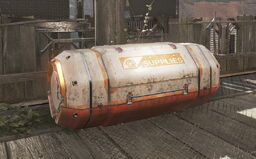 Supply bins are found throughout a map around beacons, named location, or at random points between Points of Interests.

Supply bins are the main source of finding Gear, Regen items, Ammo, Weapons and, once a day, a Treasure Pack. They carry 3 to 4 items and can be found scattered across a map. They can be opened with the Interact key and pinged to show open or closed bins. They can also be opened by Crypto's

Special Blue Supply Bins can be found randomly on the map. These rare supply bins have an extra compartment that only Lifeline can open. The secondary compartment will always contain some mixture of Health Kits and weapon attachments.

Survey Beacons are devices scattered around the map that

Recon Legends can access to provide them with the location of the next ring. Their locations are randomized each match. You can only use a Survey Beacon once per round and you can use one beacon as often as you want.

Vaults are locked rooms full of Epic and Legendary loot.

In World's Edge they can only be accessed with a

Vault Key from a Cargo Bot while on Olympus you will need to take the keycard from a corpse inside the Icarus. They take three seconds to unlock.

It can also be opened with Crypto’s

Surveillance Drone if he has a key in his inventory. Loba can steal one piece of loot from a locked vault using a

Weapon Racks are loot racks that guarantee a single gun. Only guns will be on the rack, and ammo will not spawn around them.

On World's Edge, these are located at Survey Camp, on the S-shaped buildings around Harvester, the observation areas near Launch Site, and inside of Bloodhound's Trials.

On Olympus, weapon racks can be found inside the Icarus.

Yellow ziplines are set between certain locations across the map. Players can use them to travel between points across large distances and are activated with the Interact Key.

They come in two variants: vertical, and horizontal, bi-directional lines that can carry players far distances. Players can drop off with the Jump Key and reconnect to ziplines after a brief delay. Ziplines that are part of the map are permanently connected with tall zipline poles or are connected directly into the environment. Horizontal zip-lines can be traveled across in either direction, regardless of incline.

Pathfinder can create ziplines with

Zipline Gun, but can only establish them up to a certain distance and on a mostly horizontal angle. Players cannot interact with zip-lines while downed. Wraith cannot use ziplines while

Dimensional Rift is active, as both of her arms are occupied.

). Another supply ship will spawn halfway through the game. The supply ship has an outer deck and an inner hallway and contains a small quantity of mid to high-tier loot.

Punching it, shooting it, or using Pathfinder's

Grappling Hook breaks it, spewing loot onto the ground nearby.

Flyers are creatures that can be eliminated to access a death box with randomized loot. Some of them are caged and will alert other players to your presence by emitting a loud screech, but caged Flyers do not contain any loot.

Large towers that can be activated, fully charging the ultimate ability of all players standing on the platform. The tower recharges after a few minutes.

Bunkers scattered over Kings Canyon that contain high tier loot, a fixed Legendary item, and a charge tower. They were removed in

Located in ECHO camps, these towers can be raised by pressing a button. They will then create a vertical zipline anyone can ride. They will also usually spawn sniper weapons, ammo, and attachments.

Containers scattered around the map that contain weapons, ammo, and other high tier attachments that can only be accessed by planting a grenade into the door using the interact button on the door as opposed to throwing a grenade at the door. There are two doors, and once one of them is opened from the outside, the other one can be opened from the inside.

The train at Refinery

The Train that used to move along a rail which encompasses most of the map stopping at various points of interest around the map, and carries several Supply Bins which contain high-tier loot. Its location is always visible on the map, and the front car emits a blue light similar to Care Packages. It is currently disabled in the current incarnation of World's Edge.

The train is made of six cars. The front car contains a control panel that can be used to stop the train while it is in motion. The other five cars alternate between open-air platforms, which have two supply bins on each, and indoor cars with no loot. The supply bins have a high chance of containing a fully kitted weapon.

The train will not do any damage from running into players but can crush them against some walls close to the track. However, do take note that the train can push players into The Ring as the game progresses in Rounds, which will likely eliminate the player(s).

It does not move anymore now, but is now seperated into different sections around the map.

Geysers are similar to a Jump Tower, in which you re-launch into the sky, but work much faster and have a shorter glide distance.

Cargo Bots fly around the map carrying orbs that cycle through Blue, Purple, and Gold colors. When shot, it will drop the orb, which contains loot appropriate to the color it was when it was shot. Some cargo bots also give off Red lights, indicating that they will drop a

Vault Key. The bot itself deals a small amount of damage when it hits the ground.

Each color has different time windows for how long they are displayed, with yellow lights having the shortest windows and blue lights the longest. After shooting down the drone, the orb will not change the light colors. This requires players to carefully time their shots if they wish to receive Legendary items.

A cargo orb is used as a disco ball in the Mirage Voyage and works the same way. Two purple (sometimes a gold) would spawn if the party button is pressed. The orbs spawned by the party do not change their color and rarity of items.

Players can also find cargo orbs at Pathfinder’s Fight Night. They can be found inside the boxing ring and can be punched open. They can still contain weapons and grenades, but they can’t be used until the player exits the boxing ring.

The Trident vehicle is the first vehicle in the game. It can be found in 12 locations around Olympus.

It has a "boost" feature, where it will boost the vehicle's speed for ~0.5 seconds, and has a 25-second cooldown for each boost.

The vehicle can fit multiple legend abilities on it. These include:

The vehicle cannot be destroyed unless it falls off the map. Shooting the vehicle will do 20% damage to each player in the vehicle. The Trident can be stunned with an

If the vehicle falls off the map, players inside of the vehicle will automatically be launched to the air instead of falling out of the map with it. However, the player is unable to travel long distances after being ejected.

Loot MRVNs are MRVNs that give players loot after interacting with them. They produce tiered loot equal to what is shown on their screens. After that, they power down and will need to be recharged.

All Loot MRVNs are initially single-armed. However, if its arm sparks, when it dies it will drop a MRVN Arm that players can pick up and attach to another single-arm loot MRVN. When the arm is picked up, a prompt will comes up to ping the closest single-arm MRVN. Interacting with the other MRVN will make it so happy that it now has 2 arms that it will guarantee drops Legendary items before deactivating forever. The map will spawn a maximum of 24 MRVNS, with a maximum of 5 of them able to drop a MRVN Arm. [1]