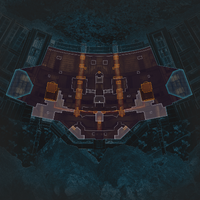 Overflow is a custom

Arenas map introduced in the

After trace amounts of Branthium were discovered in magma flows on Talos, Hammond Robotics began aggressively pursuing various means of mining it. One was an automated processing rig--officially referred to as Hephaestus Station, it’s affectionately referred to as Overflow. It hasn't seen any human activity for the majority of its operation, but after its spacious platforms caught the eyes of the Arenas organizers, it began doing double-duty as an industrial mining operation and a site for chaotic combat.[1]