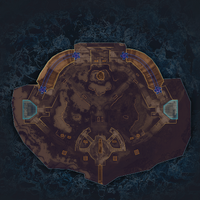 Phase Runner is a custom

Season 9 located on the planet Talos.

It features two distinct halves. The first half contains two working Phase Runners, which can be used to quickly move to that side from each spawn. The exit is located above the ground, at a height which most Legends cannot normally access. The second half contains a construction site, centered around a large tower which hosts a Supply Bin at its base. The center of the map is open, but surrounded by cliffs and other cover.

The Phase Runner on Olympus is unique, but it wasn’t the first of its kind: the Outlands scientific community had to test the technology before it was safe to install on Lilian Peck’s intellectual paradise. They built a research center in a remote section of Talos where they tested a truncated prototype of the Phase Runner. It has long since been abandoned, but the prototype remains intact and functional. Disagreements with ownership of the property has provided Arenas with the repeated opportunity to host matches without disruption.[1]