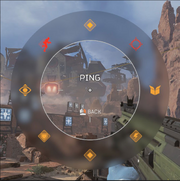 Pings are callouts for communication with teammates without the need for voice or text communication. They cover many actions such as marking enemies, announcing loot, calling "dibs" on announced loot, telling teammates where you are going, and many others. Each ping triggers a voice line from your legend, and a text message in the chat if enabled.

Pings are bound to

by default. Holding the button brings up the ping wheel.

These pings put a marker on the map for everyone in your squad.

By default, the basic ping triggers a "let's go here" voice line. However, it can also be used to highlight and vocally point out items, map features, or enemy ability usage. The following things can be pinged with unique voice lines:

Bringing up the ping wheel allows for seven more options. These pings do not change depending on what you ping. They are, in clockwise order:

The 'Someone's Been Here' ping is also used when Bloodhound pings

Recent Battle ping is used instead.

These pings only trigger voice lines for yourself and squadmates.

The following are options when pinging another squadmate's ping:

You can also thank squadmates for putting down

Domes Of Protection, or a

Using the ping button in inventory menus allows you to request certain loot items from your squadmates.