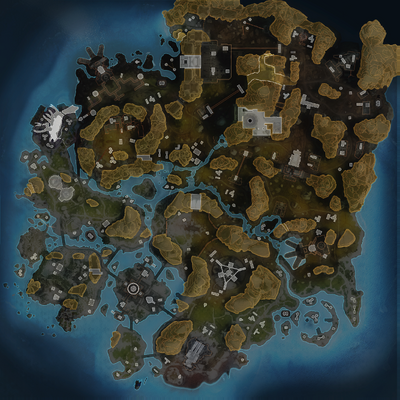 Storm Point is a map released in

Season 11 located on the planet Gaea.

This deserted island wasn't always so deserted. Part of the New Antillia Archipelago[1], this beautiful island teeming with plentiful resources was one of the first places where early IMC expeditions made landfall on the planet Gaea. However, the area was isolated and beset by tropical storms. A permanent settlement was established on a nearby coastline – today known as the city of Suotamo – and power-generating storm catchers were built on Storm Point to meet the growing city’s energy needs.

When the IMC pulled out of the Outlands, the storm catchers fell into disrepair. Eventually, one finally stopped working – but not on its own. It had been pulled down, and its absence exacerbated the storm that surrounded the island. A survey of the area revealed the remains of several unique settlements built across the centuries, but no survivors. One such settlement was erected around 2716, after the IMS Hestia-01, an IMC vessel, crash-landed on the southern tip of the island. [2] The people of Gaea abandoned the island for many years, apart from the occasional scavenger or pirate group that attempted to loot what was left behind. Until, of course, it caught the eye of the Mercenary Syndicate, who saw it as a perfect location for the Apex Games.

During what was believed to be Bangalore's final match, a large crustacean-like creature came ashore and began to attack the island. As a result, IMC armories began to emerge from the ground at various locations across the island, guarded by Spectre combat proxies. Through the combined efforts of the Legends, the creature was defeated, and its body became part of the arena.[3]

With only one jump tower on the map (at Highpoint), legends will cross large areas of the map mostly with the use of Gravity Cannons, which launch them to a predetermined location. When being launched, players will have their full arsenal available.

Players will encounter three different types of wildlife; Prowlers, Spiders and Flyers. Prowlers and Spiders have their own nests where killing them will cause them to drop loot based on a players' equipment loadout. Flyers, similar to those in Kings Canyon, will drop death boxes carrying random loot. Damaging any animal will grant a small damage percentage increase on players' evo-shields. Clearing a nest will provide a squad with crafting materials divided amongst them.

Scattered across Storm Point are four IMC Armories, elevated bunkers containing several Weapon Racks and multiple initially locked Supply Bins. After activating the security system, players will have to fend off several waves of Spectres. After surviving for 60 seconds, loot will be revealed, with more loot being gained with more Spectres defeated. Players can then leave through a jump pad.