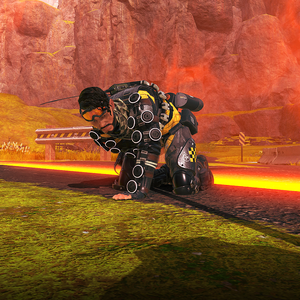 The Ring is a frequently shrinking circular zone, outside of which players will take constant damage. As the game progresses in Rounds, the ring will deal more damage and shrink to smaller and smaller sizes until the whole map is enveloped.

There is a roughly 60 seconds period before Round 1 starts during which players cannot see where the ring will shrink to.

The Modified Containment Ring functions on similar principles to an Active Denial System. The outer area is filled with 95 GHz light waves, causing the surface of a target's skin to continuously heat up to painful degrees. The field is contained within two bubble shields similar to Gibraltar's

Dome of Protection; one envelops the entire arena, while the other keeps the ADS out of the playable area, and shrinks throughout the match.

The Syndicate commissioned the Ring for the Apex Games after noticing that practice matches were often drawn out overnight because some competitors preferred to stay put. The ADS concept was designed by 15 year old Natalie Paquette and pitched by her father Luc. The two went on to build the final product, though Luc would die the day of its unveiling.

During testing, MRVNs were programmed to be able to access the Ring's future positions via Survey Beacons, so they would be able to escort humans to safety.